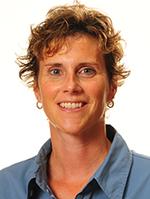 Marlin has more than 25 years of experience working with all levels from youth to college athletes. She prepped at Cedar Rapids Kennedy and played collegiately at Morningside, setting single season and career records for the Cougars and Chiefs.

Marlin became head coach at Mount Mercy in June 2013 after serving as associate head coach for the Mustangs since 2006. In 2015, she led Mount Mercy to its first 30-win season in more than 20 years and the first NAIA national tournament berth in school history.